Just like life building (rebuilding) a blog is a journey.... please stick with us as we make this blog better. Thanks y'all!

The Lord knows our circumstances and the intents of our hearts, and surely the talents and gifts He has given us. He is able to gauge perfectly how we have performed within what is allotted to us, including by lifting up some of the many surrounding hands that hang down. Thus, yearning for expanded opportunities while failing to use those at hand is bad form spiritually. Elder Neal A. Maxwell

{Take Action Thursday}The Truth, The Whole Truth and Nothing but the Truth

I'll just jump right into the thick of things......

because it is more in depth...and well a bit more truthful...but that is just me speaking.....and a lot of smarter peeps the I!

...ad speaking of food and farms....you'll want to go here and sign a petition to tell the USDA to NOT purchase PINK SLIME and feed it to our kiddos or any kiddos in the school lunch program!!!

And by the way...there are estimates that 70% of the beef sold in American grocery stores has this pink slime in it.....it's cheap for a reason.....eeehhhhh!

I would also post about the bad fats in girl scout cookies.....but that just may be overkill on my part.....still beware.

Posted by Wanna be farm girl at 10:39 AM No comments: Links to this post

GOOD MORNING!!!  or rather almost afternoon.....

I have been overwhelmed and somewhat disillusioned with my blogging....with keeping my house in order, feeding ten people traditional and nourishing food...

(as of this minute, sitting on my counter there is sprouted wheat (that I sprouted the other day and then dried) mixed with raw milk yogurt to dry and crumble to make cold cereal...since my kiddos can't live without it...r so it seems and I refuse to buy the extruded crap  stuff, oats soaking in filtered water with whey to make granola because I know that a few will refuse to eat the sprouted wheat until I force it down them and the realize it really is good, black beans soaking in filtered water and lemon juice for tonight's dinner [yes beans once again honey...but their soaked like last nights...so we should all avoid the tummy issues that are unpleasantly smelly (and, um, yes....girls fart.....)] raw milk yogurt in the crock pot (trial run with this in a crock pot versus the warm water bath) and the ingredients to make home made laundry soap that I just ran out of)...

and always...always looking for my little piece of heaven on earth, my homestead farm....among other things like the warm warm sun that brought us out of hibernation yesterday and pretty much helped me to not accomplish one thing as I sat outside with even the baby and listened to the frogs croak!

That...and reading other blogs!!  so much great stuff!!...and sometimes debilitating for me when I read the talent ad the measure of their researching..... then today I ran onto this wonderful post by The Nourishing Cook, I needed to hear what she had to say!!

Like I said I have internalized way to may this the past couple of weeks... including but not limited to my husband liking the status quo of store brand staples and out venturing out....and that's ok, when we are 100 years old and sitting on our porch....rocking.....he'll get it and be thankful.

...and if I can inspire just one person to change their thinking and how they eat then I will be thankful for that.  Though my aim is for many more then that and I often have to bite my tongue so as not to scare peeps away.

..and if I can connect with one person and create a respect and hopefully a friendship beyond the walls o my little home and community, I will have succeeded.

One of the ways our family does this is by hosting international visitors through the Council for Citizen Diplomacy. There motto is "welcoming leaders from around the world", and if we think about it, we are all leaders in the world.

About once a month, we have 2 to 3 people come to our home for dinner and conversation. We have welcomed people from China, Swaziland, Nigeria, Moldova, Pakistan, Afghanistan, Iraq, Bosnia, Turkey, Taiwan, Kazakhstan and probably a few that I have forgotten.  Often they are over on a three to four week tour of the US to learn about the educational system, women and small businesses, election processes, law and media representation....and then they come to our home...ad they are often surprised.

That we don't live in a mtv overbuilt over decorated house, that as Americans we have 8 kids...in a three bedroom house...that I stay home.....and that I like to be at home....that I have a college education and degree...and that I still don't work outside of the home, they are surprised as we share our challenges in living in America and trying to ear a living....and sometimes they are just surprised that an American family has 8 children.

Sometimes they speak English, sometimes they do not...but each time we have had these wonderful men and women in our home, the sweetest spirit resides as we share stories and thoughts, and laughter and struggles, but mostly our love for the people around the world and our sincere desire to know them, to understand them and to build bridges that are often absent because of ignorance and even intolerance.This desire stems from my husbands service for the Department of State in Iraq and Afghanistan and the love he developed for the people of these countries.  And it is truly a love, not just a job to be done, because as you see the unconquerable spirit of these men and women and their families and their courage to stand up and be counted as leaders of change and freedom to make ones own choices. These friendships are still developing thankfully to facebook and email and following each others progress.

The last visit summed up what we all feel in these meetings by  a Pakistani man that was so far removed from our culture that you would think we had little in common. He was a strict Muslim, had a prearranged  marriage and had very set ideas concerning America and her people.  I am a America Christian (LDS, or Mormon as known more commonly) mother of eight children with a college education that has chosen to stay home with her babies, but still has strong opinions about education, politics or world events (that sometimes throws them or a big ole loopty loop! especially the men)..and at the end of our visit he stated

I share all of this with you (and hopefully more in the future) because over the last few days I have been saddened by several facebook posts and even a blog post that singled out a people as less then or not worthy of being worthy of something. These posts and comments are rude and condescending, and alienate so many people. Sometimes I respond and sometimes I leave it alone, because like grandpa says, you can't argue with stupid.....not that these people are stupid...they are just misinformed....

But I wonder would they say these same comments if I was standing in front of them ( not that they were directed at me...) if they could look me in the eyes and see that I am as human as them. Wold wars and contentions cease if leaders had to stand toe to toe and look each other in the eye before they committed their troops to fight, often unable to see the others eyes.  Probably, but I wish it wasn't so...I wish that we would each stop and look each other in the eye before we said what we thought needed to be said......

...and really it starts at home...in our families, with our neighbors and the guy down the street that let's his dog do his business on your lawn, and with the stranger that cuts in front of you in the grocery line....and bigoted blogger or face booker that thinks they are doing a favor to mankind by being negative and mean spirited about someone else's thoughts, religion, political leanings or feelings (football teams don't count in here! ha!)  We can agree to disagree and still be friends as long as we don't mock, become pretentious, or smug about our ow standings i the human race.

"It is  serious thing to live in a society of possible gods and goddesses, to remember that the dullest and most uninteresting person you talk to may one day be a creature which, if you saw it now, you would be strongly tempted to worship...There are no ordinary people. You have never talked to a mere mortal. Nations, cultures, arts, civilization - these are mortal, and their life is to ours as the life as a gnat. But it is immortals whom we joke with, work with, marry, snub and exploit." CS Lewis, The Weight of Glory, 1949

Well said, CS, well said...better then I ever could.

Posted by Wanna be farm girl at 4:02 PM No comments: Links to this post 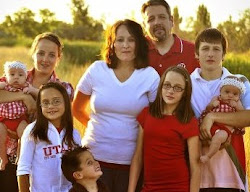 we've since added another baby girl!....and we need a new family picture!